At our squadron 59 meeting on 12-Sep-22, our Group 3 Commander, Maj Ken Benner, gave an electrifying presentation on science and physics that captured everyone’s attention.

We understand that this was the first of two presentations that Maj Benner plans to give. We were very fortunate to have this presentation.

Maj Benner started off by demonstrating how 15,000 volts of DC current could cause electricity to flow through air, just like lightning, using his mini-induction Jacob’s Ladder.

Next, he showed that a magnet falling through a copper tube generates a current in the copper causing a reciprocal magnet field that actually slows down the magnet as it falls through the tube.

He did several other demonstrations with other metals that were fascinating.  For each demonstration, he explained the physical principals being demonstrated.

His last demonstration was the most “exciting” because he electrically charged various members of the audience using his Van De Graaff Dome. 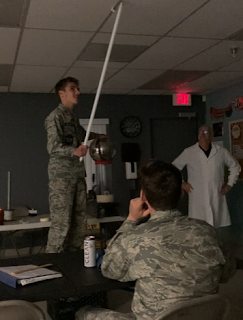 The first was C/Msgt Daniel Armstrong.  He placed his hand on the dome and his hair stood on end.  He was able to light a fluorescent light bulb just with his hand. 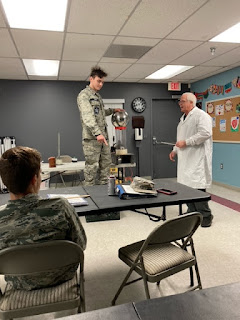 The second cadet, C/SrA Jackson Rogers, was not only able to light the fluorescent light bulb, but he was able to nearly blow out a candle just by pointing his finger at it. 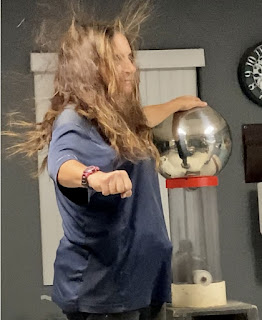 When Capt Christina Wilking tried it, her hair almost exploded. She could feel the electric charge going from her hand to the rest of her body. She tried all of the other tricks, including lighting a fluorescent light bulb with her hand. 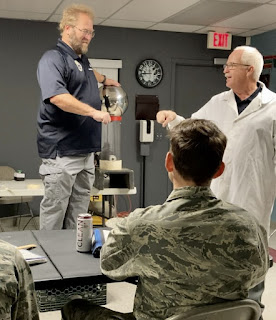 Last, but not least, was our squadron commander, 1st Lt Eugene Hawks.  Although Commander Hawks may be a little challenged in the hair department, he had some hairs that actually did stand at attention. 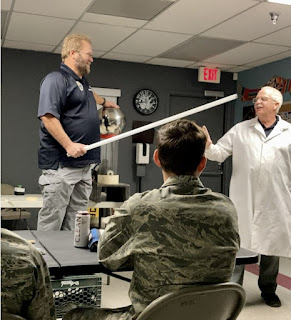 Maj Benner showed him how he could send a spark just from his folded hand, and he was also able to light up the fluorescent light bulb just with his hand.

All in all, it was a very enjoyable evening. Thank you very much, Maj Benner, for the entertainment and the education we received.

WE look forward to your next presentation that you plan to give in the next few months! 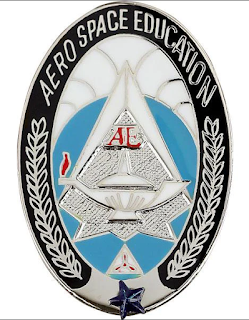 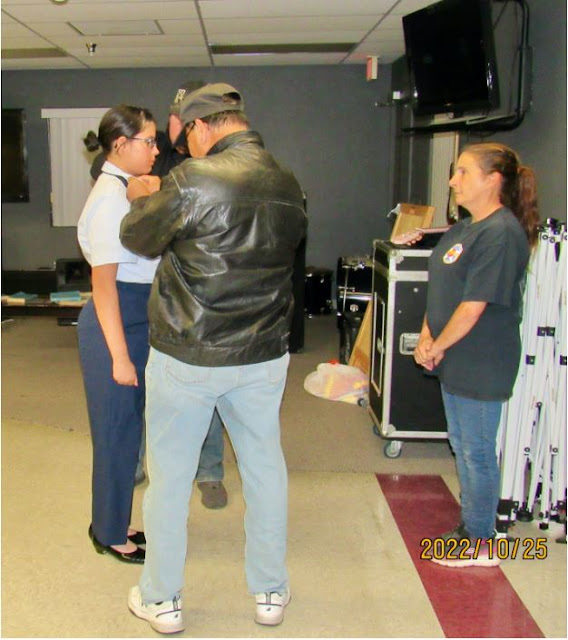 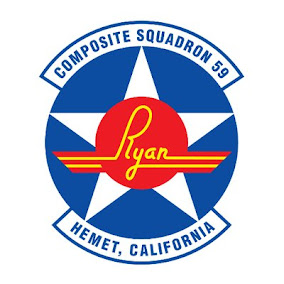